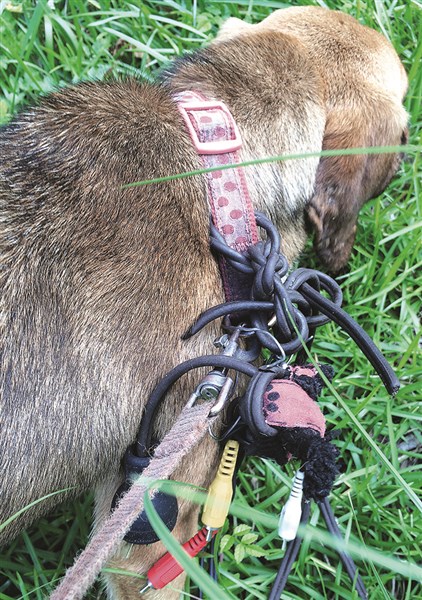 With no leads in the case of a young dog found tied to a rural bridge early this month, PETA (People for the Ethical Treatment of Animals) is offering a reward of up to $5,000 in the case.
That reward is payable “for information leading to the arrest and conviction of the person or persons responsible for this crime,” the Washington, D.C. based agency said in a news release.
Ten days after the year-old beagle mix was spotted by a passing motorist near Slippery Log and Thompson Town roads south of Whiteville, Columbus County Animal Control Director Joey Prince said he hopes the reward will lead to the person responsible.
“I’ve got nothing,” Prince said of the investigation so far, which also involves the Columbus County Sheriff’s Office.
In the absence of any tips or leads, Prince said he’s left with a theory about the dog found tied to a bridge with a combination of wires, an extension cord, and duct tape.
“This is obviously an ex-boyfriend or an ex-girlfriend or something like that determined to do something to emotionally hurt their ex,” Prince said.
With daytime temperatures approaching 100 degrees, the dog was at risk for life threatening heat stroke. Insect bites indicated the underweight and dehydrated dog had been tied to the bridge at least overnight.
“It takes a dangerous lack of empathy for someone to tie a puppy to a bridge and abandon her to die slowly from starvation or heatstroke,” PETA Vice President Colleen O’Brien said. “PETA urges anyone with information about this case to come forward immediately, before anyone else gets hurt.”
Anyone with information about this case is encouraged to call Columbus County Animal Control at 910-641-3945.
For more on this story see Wednesday’s Tabor-Loris Tribune in print and online.