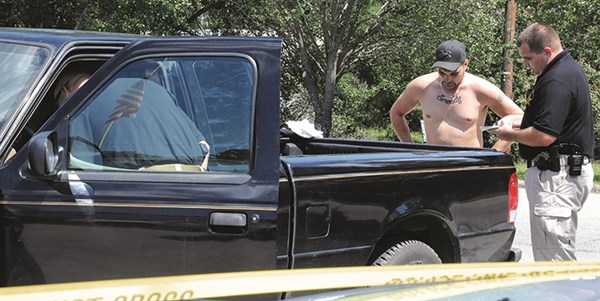 A sheriff’s deputy interviews a witness while another deputy looks through his truck in front of the Tabor City Emergency Services building Tuesday. (Deuce Niven photo)

UPDATED: A man shot in the back was brought to the Tabor City Emergency Services (TCEmS) building Tuesday.
Justin Boyd Williamson, 28, of Tabor City suffered serious injuries, and was transferred by helicopter to Grand Strand Regional Medical Center in Myrtle Beach after a Fair Bluff Fire/Rescue crew rushed him by ambulance to McLeod Loris hospital, Columbus County Sheriff’s Office spokeswoman Michelle Tatum said.
Williamson and Frankie Lynn Hammonds, 25, injured by what appeared to be a single shot fired either at a home or inside the pick-up truck that carried them to Tabor City, Tatum said. Hammonds, who may have accidentally discharged the weapon, was sitting behind two men in the front of the pick-up truck. He suffered an injury to a finger but declined transport to a hospital, Tabor City Police Chief Donald Dowless said.
Hammonds was later taken to McLeod Loris hospital for treatment of the wound to his hand, Tatum said.
Another man in the front of the truck, not injured, drove to the EMS station, and left with a deputy, apparently taking him to the area where the gunshot was fired. Tatum, on Tuesday, said she did not have information on that man’s identity.
Deputies seized a .22 caliber handgun and a spent shell casing, a shotgun, “green leafy substance,” glass pipe, ammo case, and a wallet, an incident report by Deputy Darris Floyd said.
Still early in the investigation, Tatum said investigators were late Tuesday afternoon still trying to sort out just what happened, apparently somewhere on Ten Mile Road outside of Tabor City.
Look for more on this story in Wednesday’s Tabor-Loris Tribune in print and online.