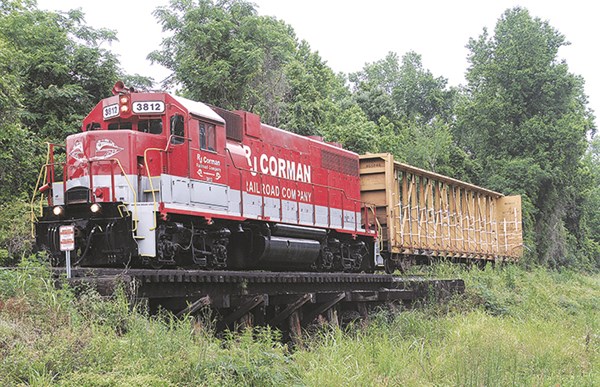 Significant improvements to rail lines in Columbus County and two adjacent South Carolina counties are coming through a $9.7 million grant from the U.S. Transportation Department.
U.S. Sen. Tom Rice, a Republican whose 7th Congressional District includes Horry County, South Carolina announced the grant award, which will improve track between Chadbourn in Columbus County, Conway and Mullins in South Carolina.
“This will upgrade the entire infrastructure,” said R.J. Corman Railroad Group Vice-President for Sales and Marketing Bill Henderson.
Corman completed purchase of the former Carolina Southern Railroad late last year, and restored service on the tracks idle for more than four years earlier this year.
“When we got the line it was in complete disrepair,” Henderson said. “We want it to be one of the premier short lines in the entire country.”
Service now is “neither efficient nor optimal” with trains limited to 10 miles per hour on the existing tracks, despite millions already spent on restoring the line and repairing bridges, Henderson said.
Grant funds will be used for stone to stabilize track beds, rail, and ties, Henderson said. That will allow speeds up to 25 miles per hour, with heaver loads and longer trains.
“Big unit trains will be coming,” Henderson said. “We want to upgrade infrastructure so we can accommodate the big, 100 car heavy trains.”
Corman lines extend from east of Chadbourn to Fair Bluff and Tabor City on separate tracks, then on across the state line to Mullins and Conway respectively. Corman connects to the national CSX rail in Mullins.
Henderson gave credit to political leaders and lawmakers in North Carolina, as well as Rep. Rice, for securing the transportation grant.
“This would not have been possible without the efforts of Columbus County Commissioner Buddy Byrd, Economic Development Director Gary Lanier, state Sen. Bill Rabon, U.S. Sen. Thom Tillis, and U.S. Sen. Richard Burr,” Henderson said. “There were others, too, they were all critical in our success.”
For more on this story see Wednesday’s Tabor-Loris Tribune in print and online.