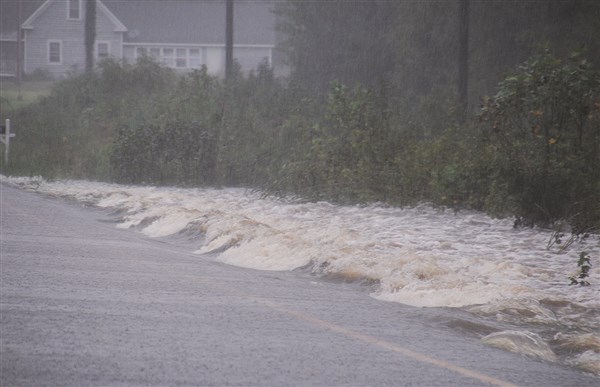 Word that U.S. 74 was open again at the Columbus and Robeson county border was a bright beginning in what will be a slow process rebuilding roads damaged by Hurricane Matthew, NC Department of Transportation District Engineer Drew Cox said Tuesday.
Transportation officials have created a new traffic pattern on both sides of the county line, Cox said, due to numerous washouts under the pavement on the west side of the Lumber River.
Flood waters did no damage to the bridge, but repairing the roadway is expected to take at least three weeks, Cox said.
Eastbound traffic approaching Columbus County will begin the shift to two-lanes east of NC 130, the lane restriction crossing into Columbus County on the westbound bridge, the four-lane pattern beginning between Boardman and NC 242, Cox said.
Because of the shift, traffic at the Boardman intersection will be right-in, right-out only, Cox said, with motorists required to turn around either at NC 242 or in Robeson County.

Slow progress
Getting the major western highway connection open is a bright spot in what promises to be an extended effort to rebuild roadways in Columbus County, Cox said.
A major effort to restore traffic on U.S. 701 at Western Prong, south of the Bladen County border, could take a year, Cox said.
“It will be six months, at least,” Cox said.
Three large drainage tiles under the highway were washed out by Matthew’s raging waters, Cox said.
“We will be replacing that with a bridge,” Cox said. “That’s a whole new project, from design, to bidding it and building it.”
An easier fix is on NC 410, south of Chadbourn, at near Beaverdam Road, Cox said. Engineers determined a bridge there, already slated for replacement in about a year, was unsafe after flood waters eroded supports. Concrete was being poured there Tuesday.
“I’m cautiously optimistic that we might have that one open this weekend,” Cox said.
For more on this story, and the aftermath of Hurricane Matthew, see Wednesday’s Tabor-Loris Tribune in print and online.