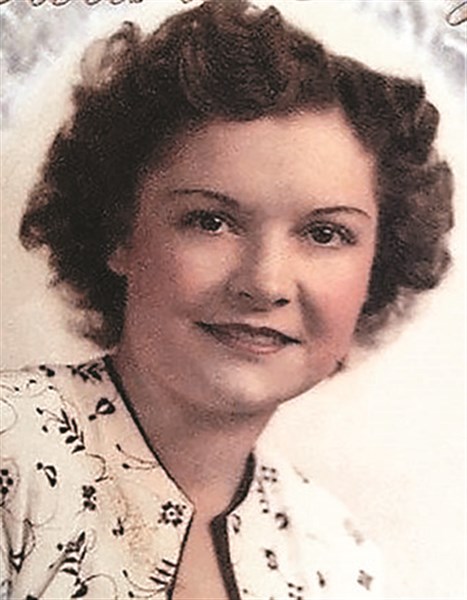 Evelyn Suggs Gore of North Charleston and formerly of Loris, left this earthly life on Friday, March 31 in North Charleston. She was 96.
Mrs. Gore was born on Aug. 16, 1920 in Loris, daughter of the late Albert Suggs and the late Ellen Gerald Suggs.
Mrs. Gore graduated from Loris High School in 1937 and wistfully recognized this year as the class’s 80th reunion milestone. She completed cosmetology training in 1938 at the beauty school that was in Florence at the time and worked for over 60 years.
During most of her career as a licensed cosmetologist, she owned and operated her own business, Evelyn’s Beauty Shop, where her women were not just her clients but became dear lifelong friends.
Mrs. Gore was also a longtime member of the Loris First Baptist Church where she was active in the Joy Sunday School class, choir, and taught children’s Sunday School. She was a member of the Loris chapter of The Order of the Eastern Star.
Miss Evelyn’, as most folks knew her, was quite a fireball of energy and talent. She was always active, whether beautifying her women, working alongside her dear farmer husband in the fields and gardens, freezing and canning the bounty they grew, feeding multitudes with all her great cooking, or working her fingers continuously as she sewed, crocheted, and embroidered.  She taught us all so much and will be greatly missed by those who knew her.
Survivors include her son, Dr. Bobby G. Gore and wife, Maxine of Goose Creek; two daughters, Betty Gore and husband, Dr. Robert Ball of Charleston, and Laura Gore Wadford and husband, Fritz Goforth of Charlotte; nine grandchildren, Leslie Gore Clegg and husband Bill and Luschen Gore and wife Kelly all of Huntersville, Tommy Odell Gore of Pensacola, Florida, Kara Gore Miller and husband Paul of Goose Creek, Shawn Gore and wife Caroline of Summerville, Robert Gore of Charlotte, Katie Goforth of New Orleans, Louisana, Robert Ball and wife Rebecca of Hull, Georgia, and Mark Ball and wife Elizabeth of Daniel Island; and twelve great-grandchildren.
Mrs. Gore was predeceased by her husband of 58 years, Edwin Odell Gore; her infant daughter, Ellen Sue Gore, her brother, Alton Albert Suggs and two sisters, Vera Suggs Miller and Esther Suggs Cartrette.
Visitation was planned from 5 to 7 p.m. Tuesday, April 4, at Hardwick Funeral Home, Loris.
Funeral services were planned for 11 a.m. Wednesday, April 5 at Hardwick Memorial Chapel with Dr. Louis Venable officiating, committal services following at Carter Cemetery.
Memorials may be given to Loris First Baptist Church, 3117 Main St, Loris, SC 29569 or to a charity of one’s choice.
A guest register is available here.