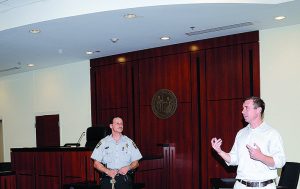 “Gas leaks in the courthouse have been fixed,” Columbus County Clerk of Court Jess Hill said Thursday evening, paving the way for the two-year-old court facility to re-open on schedule Friday morning.

Hill closed the facility Thursday after the odor of gas, coming from a leak in the boiler room, was detected in the three story building. Staff in the Clerk of Court’s office was sent home for the day while a repair crew was called in.

Child Support Court is scheduled in Courtroom A on Friday, Hill said.

“Substantial issues” with heating and air conditioning system at the Columbus County Courthouse prompted Clerk of Court Jess Hill to shut down the building and send staff home Thursday morning.

Hill said a smell like that of natural gas brought a boiler repair crew to the building earlier this month, but the smell was obvious inside the building when staff reported for work Thursday morning.

Judges were elsewhere in conference Thursday, with no court scheduled, leaving the decision to close up to the Clerk. Only his staff was working in the building Thursday.

“They are working on the system now,” Hill said. “I hope we’ll be back open tomorrow, but right now I can’t guarantee that.”

Court filings may be made at the Magistrate’s Office in Whiteville while the Clerk of Court’s office is closed, Hill said.

Hill said the boiler works with both the heating and air conditioning system to control the climate inside the three-story building the court system just occupied two years ago.

This story will be updated as appropriate. Look for a complete report in the next Tabor-Loris Tribune in print and online.