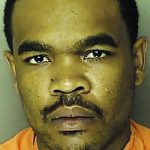 Facing a possible life prison sentence after entering a plea to drug and weapons charges in March, a Loris man will instead serve up to six years behind bars.

During the change of plea hearing for McCullough evidence was presented showing that a Conway car dealership notified the Horry County Police Department last Oct. 21 that they had located a backpack in a repossessed car that contained a firearm and what appeared to be heroin, the news release said.

That gun, police said following McCullough’s arrest, was one of many stolen during a break-in at 5 Star Guns in Longs that took place during a prolonged power outage during Hurricane Matthew last October.