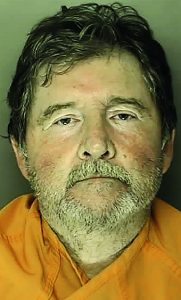 Gunfire and threats of violence prompted a standoff with Horry County Police in the Loris area that lasted seven hours, with a local man jailed and facing multiple charges early Monday.

Linford Onen McCormick, 59, was taken into custody with no one injured following the standoff at his home on Hwy 348 near West Bear Grass Road, an HCPD report said.

Two women, not identified in the redacted report, told police McCormick fired shots and threatened them, though it did not appear any of those shots were aimed at the women, the report said.

One HCPD officer who knew McCormick made contact with him by phone. McCormick agreed to allow officers to check on him, but that they “better not step on his porch,” the report said.

Approaching officers noted that McCormick was on the porch with a rifle. Soon after, the second woman called 911, then with an officer, and said McCormick had threatened to kill her and fired one shot, but that her back was turned and she did not see where he aimed, only that “she just saw limbs falling from the tree.”

Police were eventually able take McCormick into custody, and took him to a hospital for evaluation before transferring him to J. Reuben Long Detention Center near Conway, where he was booked just before 5:30 a.m. Monday.

Police also determined that McCormick was prohibited from possessing firearms, with officers seizing 18 weapons from the home, the report said.

Charges against McCormick were not available at noon Monday.