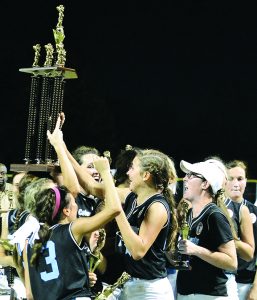 Columbus County Dixie Debs will be celebrated with a homecoming parade in Tabor City Monday afternoon on the heels of their World Series win in Alexandria, Louisiana Wednesday night.

“The chamber is just helping to organize this,” Nelson said. “We’re so proud of the girls, the community is.

“We encourage our businesses to put up signs, and to step outside as the girls pass by.”

Unsuccessful in only one game in the double elimination tournament that began last Saturday, the Columbus County Dixie Debs avenged the Tuesday night loss to Tennessee with a 5-2 victory in two extra innings Wednesday to claim the World Series title. 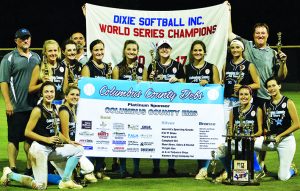 A Tennessee advantage, earning a bye in Wednesday’s action while the Columbus County girls faced possible elimination to the host team earlier in the evening, proved no matched for the determined North Carolina champions.

See more on the games and the celebrations in next week’s Tabor-Loris Tribune in print and online.