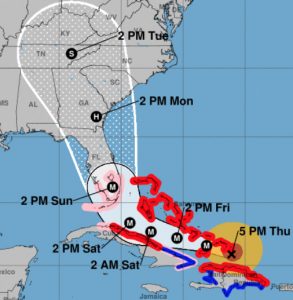 A sense or urgency is palpable in the Tabor-Loris Community as Hurricane Irma threatens the region early next week, though its path remained uncertain Thursday afternoon.

Store shelves across the area were nearly bare of bread, water and other necessities, South Carolina Gov. Henry McMaster ordered a limited evacuation of medical facilities along that state’s immediate coast, and Coastal Carolina University cancelling classes and urging students to move inland from the Conway campus.

No schedule changes had been announced for public schools in Horry or Columbus counties Thursday evening.

No evacuation for McLeod Loris Seacoast

Only medical facilities in recognized evacuation zones, essentially east of the waterway, were covered under the governor’s order, Hughes said.

At CCU all classes and activities have been cancelled, effective at 8 this evening, the university Facebook page said. Residence halls are to close at 9 a.m. Friday, students encouraged to evacuate. Campus will be closed starting at 5 p.m. Friday, with shuttle service available to Myrtle Beach International Airport from 5 to 8 p.m. today, 6 a.m. to 5 p.m. Friday. Transportation from the student union to the Amtrak station in Florence.

A program on Fossils of the Pee Dee Region scheduled for Saturday at the Horry County Museum in Conway has been cancelled in advance of the storm, and will be rescheduled.

Emergency officials throughout the Carolinas were stepping up preparations for the storm. In Horry County, where operations on a normal day are considered at OPCON 5, that level was increased to OPCON 4

National Weather Service meteorologists were urging everyone to pay close attention to forecasts into next week, with some of the latest forecast models Thursday afternoon indicating a more westward track for Irma, good news for the Tabor-Loris Community area.

Most importantly, forecasters said, the storm track is not certain, with small shifts capable of making a big difference in the impact Irma has here.

Look for updates and news on Hurricane Irma and her impact on the Tabor-Loris Community here, as events warrant, and full coverage in the next Tabor-Loris Tribune in print and online.