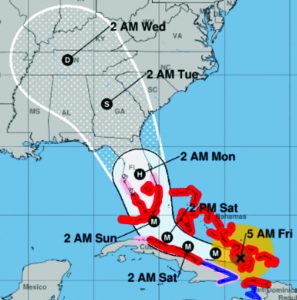 Hurricane Irma’s forecast track was looking much more favorable for the Tabor-Loris Community and extended region early Friday, although the 8 a.m. National Weather Service briefing said “it is cautioned again that we can’t let our guard down at this time.”

A more westward track for the monster, killer storm on the latest forecast maps showed barreling into Florida Saturday, its eye still in the middle of the state at 2 a.m. Monday, and coming closest to the TLC overnight Monday into Tuesday morning, the center of the storm about mid-Georgia.

Irma remains massive, the NWS said, and while her speeds will diminish over land and as it ingests dryer air from two steering fronts, southeastern North Carolina and northeastern South Carolina can still expect wind gusts likely to topple some power lines, possible flooding in low-lying areas, and an elevated risk of isolated tornadoes.

Updates will be posted here as warranted, with a recap coming in the next Tabor-Loris Tribune in print and online.