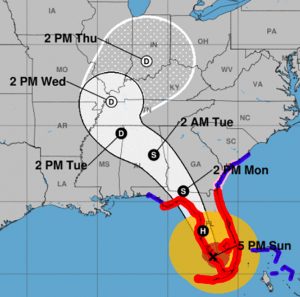 Columbus County Schools made the decision to close schools on Monday just before 5:30 p.m. Sunday, spokesman Kelly Jones said. All students and employees are affected by the decision, Jones said.

“Based on weather advisories for Hurricane Irma, Horry County Schools has cancelled school for Monday, September 11,” this district announced on its Facebook page. “This cancellation includes all extracurricular activities. School and district employees who work 246 days are asked to report to work, as conditions allow. HCS will continue to monitor the progression of Hurricane Irma and will provide an update on Monday afternoon by 5 p.m. if further schedule changes are necessary.”

A meeting of the Horry County Board of Education scheduled for Monday has also been cancelled, the board to meet next on Sept. 18.

A National Weather Service forecast for Columbus County at 5 p.m. Sunday called for an 80 percent chance of showers and thunderstorms, some heavy on Monday, with sustained winds from 23 to 28 miles per hour, gusts to 43 MPH.

Updates will be posted here as warranted, with the full story on Irma’s impact on the Tabor-Loris Community in this week’s Tabor-Loris Tribune in print and online.