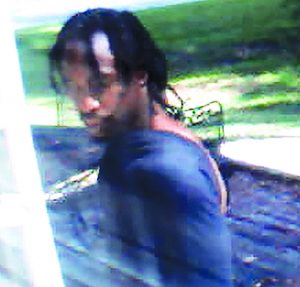 Burglary, shooting suspect before donning hood and mask, above, and after, below. (CCSO images)

Detectives believe the man approached the Dothan Road home of Montgomery Lowery more than once, the last time donning a mask and hoodie.

Lowery, 31, arrived at his home about 2:45 p.m. Friday, noticed his front door was open, and before he got out of his vehicle watched as a “young, slender, black male, dressed in all black, wearing a blue bandana on his face” walked out of the home with a gun,” Tatum said previously. 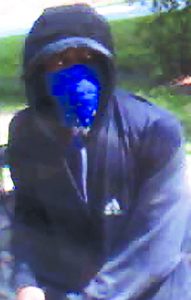 Lowery was shot once in his arm after the burglar approached the car, tried to get in, and Lowery was driving away. His injury did not appear life threatening.

A K-9 unit and helicopter from the Brunswick County Sheriff’s Office assisted the Columbus County deputies searching the gunman, but were not successful in the search, Tatum said.

Anyone with information on the incident or the identity of the gunman is asked to contact the Columbus County Sheriff’s Office Criminal Investigation Unit at 910-640-6629.

Updates on this story will be posted here as events warrant. See the full story in the next Tabor-Loris Tribune in print and online.