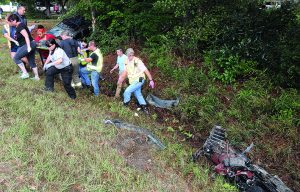 Charges of misdemeanor death by motor vehicle were leveled against the teen behind the wheel of an SUV that struck two stopped motorcycles near Tabor City on Oct. 8, Assistant District Attorney Alan Adams said Friday.

Alexandra Comstock, 17, of Hope Mills, surrendered herself to NC Highway Patrol Troopers on Friday and appeared before a magistrate in Whiteville, Adams said. Comstock was released on a $50,000 unsecured bond.

Comstock is charged with the deaths of Whitney Jackson, 29, and her fiancé John Nash, 30, who shared a home in Franklinton. Jackson, seated behind her fiancé on his new 2018 Harley Davidson Motorcycle, died when Comstock’s 2005 Jeep Liberty slammed into the back of their motorcycle, and struck a glancing blow to a second motorcycle, Trooper Richard Capps said on Oct. 8.

The couple on the second motorcycle was not seriously injured.

Adams said troopers had been gathering additional evidence in the days following the wreck, and that the decision on charges was made after he consulted with the investigators Thursday.

Comstock, whose Jeep rolled “at least twice” and who suffered non-life threatening injuries in the crash, told troopers that she had looked down at her cell phone, which she was using for GPS guidance, and did not see the motorcycles stopped as a wrecker was pulling a car from a ditch.

That cell phone has not been recovered, Adams said, and the investigation is ongoing.

“Based on the information that we have at this point we believe the charges are appropriate,” Adams said.

Updates on this story will be posted as appropriate. See the complete story in the next Tabor-Loris Tribune in print and online.

A second victim of an Oct. 8 motorcycle crash near Tabor City died Thursday, four days after the rear-end collision that claimed the man’s fiancé.

Jackson was a passenger on her fiancés new 2018 Harley Davidson motorcycle, seated behind him, when they were struck from the rear by a 2005 Jeep Liberty pulled by a Hope Mills teen, Alexandra Comstock, 17. She told investigators she had looked down at the GPS on her phone and did not see traffic stopped in front of her.

The Jeep struck two motorcycles, a glancing blow to the second that left the two riders shaken, one scratched, but neither seriously injured, Capps said.

Comstock’s Jeep flipped “at least twice” and came to rest in a ditch, just beyond the resting place of Nash’s motorcycle, Capps said. Comstock had injuries that were not life threatening.

(This story corrects the hometown for Nash and Jackson.)

One woman died, her boyfriend was critically injured in a multi-vehicle auto crash involving an SUV and two motorcycles on NC 410 north of Tabor City early Sunday afternoon.

John Nash, 30, who lived with his girlfriend, Jackson, was critically injured in the crash, taken by a Tabor City Emergency Services ambulance to McLeod Loris hospital, then transferred to the trauma center at Grand Strand Regional Medical Center in Myrtle Beach, Capps said.

Two motorcycles stopped in the northbound lane of NC 410 as a wrecker was pulling a car from a ditch were hit in the rear by a 2005 Jeep Liberty driven by Alexandra Comstock, 17, of Hope Mills, Capps said.

Trooper Gene Nance had just turned to stop traffic for the wrecker when the crash took place, and was forced to take “evasive action” to keep from being hit, Capps said.

Comstock told troopers that she had looked down at the GPS on her phone and did not see the two motorcycles stopped in front of her.

Nash was driving a new, 2018 Harley Davidson motorcycle which took the brunt of the impact, coming to rest in a ditch on the right side of the highway, Nash thrown to the north, Jackson right next to the crumpled motorcycle on its south side.

The Jeep went into the ditch and “rolled at least twice,” Capps said.

Neither Comstock nor the couple on the other motorcycle, Gregory and Rhonda Perone of Louisburg, suffered life threatening injuries, though Mrs. Perone “was skinned up pretty bad,” Capps said. All three were taken to Columbus Regional Healthcare in Whiteville by a Chadbourn/Klondyke Fire Rescue ambulance.

Troopers were unable to locate Comstock’s cell phone, but will examine it if it is found, Capps said.

This corrects earlier reporting that the SUV was southbound when the crash took place, and the spelling of Louisburg.