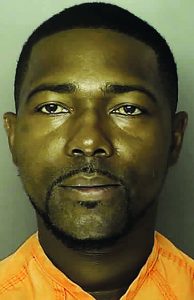 Law enforcement is on the hunt for a Nichols man convicted on gun and drug charges this week despite not showing up for his trial.

James Lamont Arthur, 35, failed to appear for trial in October, and despite a bench warrant for his arrest was still not to be found for trial this week, a news release from the 15th Circuit Solicitor’s Office said.

Arthur now stands convicted of third-offense trafficking cocaine base more than 10 grams, but less than 28 grams; possession of a schedule one to five drug – amphetamines or Adderall; unlawful possession of a pistol; and unlawful carrying of a pistol, Walter said.

Judge John sealed Arthur is found and brought to court for sentencing.

Charges were filed against Arthur following his arrest by Horry County Police Department officers on May 12, 2016.

“It was a great example of proactive policing that helped convict a repeat offender,” Walter said. “Now law enforcement can turn their attention to finding him once again, so he can begin to serve his well-deserved prison sentence.”

Anyone with information regarding Arthur’s whereabouts should call their local law enforcement agency.

Updates will be posted here as events warrant, and in the next Tabor-Loris Tribune in print and online.