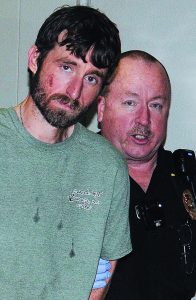 A “suspicious suspect” sought by Tabor City police after a brick was tossed through a bank window and the man was seen outside a local day care is in jail, charged with possession of an estimated 2,500 prescription medication pills, Capt. Greg Sibbett said Wednesday night.

Louis Ellis Hodge, 36, of Calabash, was found in town not far from where a suspect had eluded officers in a foot chase earlier in the day, Sibbett said.

His vehicle, a Chevrolet Trailblazer, was seized from the Maxime’s parking lot early in the day, inventoried by police and the State Bureau of Investigation, agents finding Oxycodone, Morphine, Methadone and Lorazepam in pill bottles and gallon plastic bags, Sibbett said.

Just where those pills came from is under investigation in both Brunswick and Horry counties, Sibbett said.

Police also seized an assault rifle found in the vehicle, and a 9mm bullet, but did not find a weapon on Hodge, Sibbett said. Hodge does not appear to have a criminal record that would prohibit him from possessing the gun, Sibbett said.

Hodge was charged with eight counts of trafficking opium/heroin, one count of manufacturing with intent to sell and distribute Lorazepam, and with damage to property for allegedly tossing a brick through the Hickman Road CresCom Bank branch Wednesday morning.

Bond was set at $452,000, Hodge held at the Columbus County Detention Center in Whiteville.

Lt. Richard Kosloski, who first spotted the vehicle owned by Hodge before 8 a.m. Wednesday, had been on the hunt for the suspect after a man eluded Capt. Sibbett in a foot pursuit later in the morning.

Kosloski said he was on Forest Avenue in the early afternoon, in his patrol vehicle, when he heard leaves rustling in a bush, too loud for small wildlife.

“I hollered ‘Police, put your hands up,’ before I got out of the car,” Kosloski said.

By the time backup arrived, Hodge was face down on the ground with handcuffs on, the officer said.

Look for the initial story here, the full story in the next Tabor-Loris Tribune in print and online.