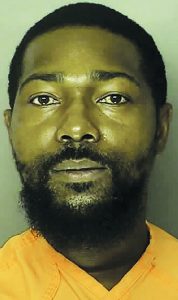 On the run since being tried in absentia in early November, James Lamont Arthur of Nichols is in custody and set to spend the next 25 years in prison for gun and drug crimes.

Superior Court Judge Steven J. John sentenced Arthur Monday to serve 25 years in prison on his conviction of third-offense trafficking cocaine base more than 10 grams, but less than 28 grams; possession of a schedule one to five drug – amphetamines or Adderall; unlawful possession of a pistol; and unlawful carrying of a pistol.

After Arthur failed to appear in court for trial in October, proceedings took place without him, a jury rendering the guilty verdicts on Nov. 7. Judge John sealed his sentencing decision until Arthur could be found and brought back to court.

“We appreciate the U.S. Marshals Task Force agents for their perseverance in tracking Mr. Arthur down and bringing him to justice,” senior assistant solicitor Mary-Ellen Walter, who prosecuted the case, said in a news release from the office of Solicitor Jimmy Richardson.