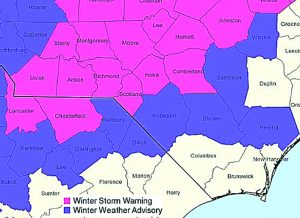 Winter weather in the form of snow or worse is expected to have a big impact on a large swath of the Carolinas Wednesday, but will apparently bring just rain to the Tabor-Loris Community, an afternoon advisory from the National Weather Service says.

Impacts “far inland” will include a wintery mix in the morning, becoming all snow by mid to late afternoon, ending in the afternoon, the NWS said.

Coastal areas, extending through Columbus and Horry counties, should expect rain in the afternoon, snow in the late afternoon ending late evening, with little to no accumulation and no icing from freezing rain expected.

An inch or two of snow in the advisory areas, blue on the map, is possible, “especially on elevated and grassy surfaces,” the NWS said. “Travel may become hazardous especially on bridges and overpasses.”

Neither Columbus nor Horry counties were included in the advisory Tuesday afternoon.

Look for updates here, as warranted, and the story if warranted in the next Tabor-Loris Tribune in print and online.