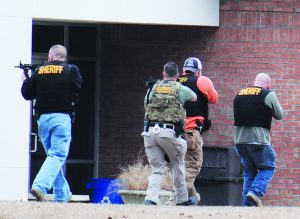 A suspect description related to Thursday’s robbery attempt at Southeastern Community College is among new details of the incident released by the Columbus County Sheriff’s Office Thursday night.

A black male wearing a black hoodie who appeared to be in his mid-20s and had short black dreads attempted to rob a female employee in the former SCC bookstore shortly after 9 a.m. Thursday, a sheriff’s office news release said.

“When the female advised the male that she did not currently possess cash, he assaulted her,” the news release said. “In an attempt to protect herself, the female victim fought back. The male suspect fled from the scene on foot.”

That man eluded law enforcement Thursday. Anyone with information on the incident is asked to contact the Columbus County Sheriff’s Office at 910-642-6551.

With no suspect located after several hours of searching, the lockdown at Southeastern Community College has been lifted.

A robbery attempt at the campus bookstore at Southeastern Community College left a female employee injured, the college on lockdown as law enforcement officers swarmed the campus in search of the suspect, Sheriff Lewis Hatcher said.

“At this point it looks like an attempted common law robbery,” Hatcher said. “I don’t believe there was a weapon shown.”

Hatcher said the woman was “hysterical” when law enforcement and EMS arrived. She was taken to Columbus Regional Healthcare for treatment, with a detective sent to interview her later in the morning, Hatcher said.

No one was being allowed on campus at noon Thursday. A few students and others were allowed to leave, after they and their vehicles were checked by law enforcement.

Multiple law enforcement agencies were assisting the Sheriff’s Office in the search and securing the campus, including the NC Highway Patrol and area police departments.

Look for updates here as events warrant, the full story in next week’s Tabor-Loris Tribune in print and online.

Southeastern Community College is on lockdown following an attempted robbery and sexual assault on campus.

“There has been an attempted robbery/sexual assault on campus,” a news release from the SCC said.

“The college is on lockdown while local law enforcement authorities conduct a sweep of campus. A suspect  has been apprehended.”

Look for updates here as they become available, the full story in the next Tabor-Loris Tribune in print and online.