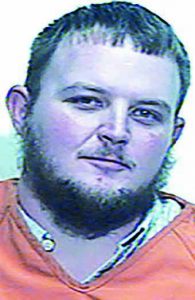 A guilty plea to a sex offense with a child charge will leave a Clarendon man in prison for more than a decade, possibly more than two, District Attorney Jon David announced Monday.

James Brandon Godwin, 33, of Old Stake Road, Clarendon, entered the guilty plea Friday in Columbus County Superior Court, and was sentenced by Resident Superior Court Judge Douglas B. Sasser to serve from 166 to 260 months in prison, nearly 14 years to more than 21 years behind bars.

Godwin will be required to register as a sex offender for life, a news release from the district attorney said.

Detectives from the Columbus County Sheriff’s Office launched their investigation on Nov. 8, 2015 after being told that Godwin had engaged in a sex act with a minor child.

During the sentencing hearing Friday the child’s mother “recounted the emotional pain and betrayal that was inflicted by these acts to her child,” the news release said. “She told the Court how the defendant was a trusted adult in the house hold at the time of the crime.”