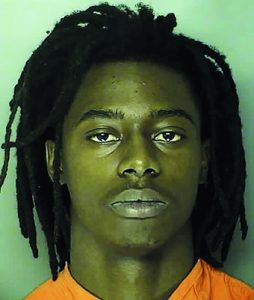 Jordan was charged in Friday’s incident involving the Loris High School soccer team. He was charged with kidnapping, assault and battery in the second degree, disturbing schools, and larceny. He was jailed under bonds totaling $16,000, and remained in custody Wednesday night.

Prosecutors are weighing their options involving a Loris High School soccer player accused of holding players on a bus after he noticed a necklace missing, a Loris Police Department report says.

That player, also accused of threatening students and their parents, and of shoving a coach who tried to intervene, has suspended as a criminal investigation continued, the report by Officer Bobby Brush said.

Team members and coaches were on a bus returning from a successful soccer match in Lake City Friday night when the student, who is 18, noticed the a gold colored necklace with a charm containing the initials “CBG” was missing, the report said.

Witnesses told police Friday night, and during a subsequent investigation that when the teen noticed the missing necklace he demanded that everyone on the bus empty their bags, and when the bus arrived at Loris High after 10 p.m. the teen would not allow players off the bus, “then forced two other soccer players/victims to block the rear exit of the bus through fear and intimidation,” the report said.

Players said the angry teen approached six players, demanded that they empty their pockets, and took cell phones from all six, the report said.

Coach Perry Hilton told police that he attempted to intervene, and that the 18-year old teen pushed and threatened to hit him.

Hilton contacted police, and when the teen learned officers were responded he returned cell phones to the player.

Witnesses said the player demanded to be paid for his loss, saying “I need $500 in my pocket next week or I’m pushing the situation, me and my whole family coming out there.”

A parent, who had been waiting in the school parking lot, told police that he heard cursing from the bus, approached it and heard the teen say “If anyone gets off the bus I will fight the first son of…” then cursing, the report said.

School administrative staff made contact with parents of every student on the bus, making them aware of what had taken place, Horry County Schools spokeswoman Lisa Bourcier. (Note, this updates earlier reporting that the coaching staff contacted parents.)

Bourcier said she could not comment further on the incident.

Officer Brush, in the report, said he reviewed the facts of the case with a solicitor, and that they will be presented to a magistrate for warrant consideration.