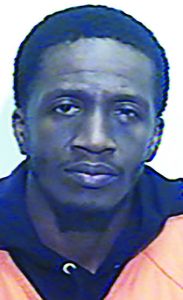 Weapon and drug charges have been leveled against a Tabor City man found inside a “suspicious vehicle” earlier this week, Columbus County Sheriff Lewis Hatcher says.

Shonte Jarrel Hutchinson, 41, of Pine Circle Drive in Tabor City was arrested after Vice/Narcotics took over the investigation Tuesday, Hatcher said in a news release.

Hutchinson was charged Wednesday with felony counts of possession of a firearm by a felon, possession of a weapon of mass destruction, possession with intent to sell and/or deliver cocaine and marijuana; misdemeanor charges that include two counts of resisting a public officer, single counts of assault on an officer and giving fictitious information to an officer.

Hutchinson is also being held on fugitive warrants from Stafford County, Virginia for felony larceny and embezzlement, providing fictitious information to an officer, and obtaining property by false pretense.

Hutchinson, previously convicted of felony robbery and using a firearm in the commission of a felony in Virginia, was jailed at the Columbus County Detention Center under secured bonds totaling $400,000.

Deputies were dispatched to a home on W.R. Cribb Drive, just off of NC 410 between Tabor City and Chadbourn, at about 8:45 a.m. Tuesday to investigate “a suspicious vehicle parked in someone’s yard,” the news release said. 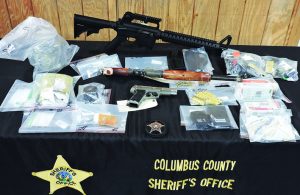 Hutchinson was inside the car, and provided another name when deputies asked him to identify himself.

As deputies they attempted an arrest Hutchinson “attempted to flee from the arresting deputy,” the news release said. “He also struck a deputy during the incident.”