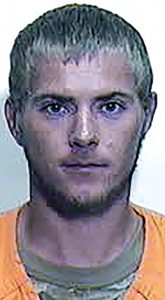 A family dispute call evolved into the seizure of a methamphetamine lab and arrest of an area man Friday, Columbus County Sheriff Lewis Hatcher said Friday.

Johnathan Dwayne Huggins, 27, of Fair Bluff Road, Tabor City, was arrested after deputies discovered the methamphetamine lab in an outbuilding at a home at 629 Gore Trailer Road, the sheriff said in a news release.

Huggins was charged with three counts of possession of a precursor with intent to manufacture methamphetamine, two counts of trafficking methamphetamine, manufacturing a schedule 2 controlled substance, and maintaining a vehicle for a controlled substance, all felonies; and a misdemeanor charge of possession of drug paraphernalia.

He was jailed at the Columbus County Detention Center under a $426,000 secured bond.

Deputies were called to the Gore Trailer Road home in the early morning Friday, the news release said, “in reference to a domestic dispute between the adults residing at the residence, the defendant, his girlfriend, and her mother. “Two young children also reside at the residence and were present at the time of the incident.”

Deputies discovered “precursors used in the manufacturing of methamphetamine,” the news release said, and summoned Vice/Narcotics Unit detectives, who obtaineda  search warrant and “discovered a clandestine drug lab in an outbuilding located on the property.

“They located drug paraphernalia, more than 28 grams of methamphetamine, and precursor chemicals used to manufacture methamphetamine, including ammonium nitrate, lithium metal, and Sudafed.”

Members of the State Bureau of Investigation’s Clandestine Lab Response Team responded to assist in removing “the dangerous compunds,” the news release said.

Updates will be posted here as events warrant, with the full story in the next Tabor-Loris Tribune in print and online.