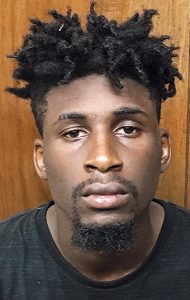 One man who said he is from North Charleston is in custody, police on the hunt for a second suspect who eluded officers, Sibbett said.

No one was hurt.

A Seal Street resident who had left his home briefly to pick up supper at a local restaurant returned to find his door open and immediately called 911, Sibbett said.

Officers responded, and met two men exiting the home just as the officers were making entry. Shots were fired at the officers as they gave chase, Sibbett said.

Caught during the chase was Lamont Antwon Delaney, 22, of North Charleston, Sibbett said.

Delaney was charged with breaking and entering, two counts each of assault with a deadly weapon, assault on law enforcement officers and resisting police, Sibbett said. Other charges are expected.

Sibbett said the second suspect may also be from North Charleston, and may have ties to the Fair Bluff and Chadbourn areas.

Delaney was seen in the Watering Street area not long before the break-in with a black man with dreadlocks wearing a red T-shirt and black pants, Sibbett said.

Anyone who saw the men and can identify the second suspect, or with other information on the case, is asked to contact the Tabor City Police Department. Sibbett said information can be shared confidentially.

Anyone with information on the wanted accomplice or this case is asked to contact the Tabor City Police Department or call 911, Sibbett said.

Look for updates on this story as they become available, and the full story in the next Tabor-Loris Tribune in print and online.