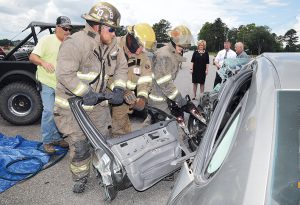 A just graduated member of South Columbus High School’s Class of 2018 and an off duty Columbus County Sheriff’s Office deputy were involved in a serious auto collision in front of the school this morning.

That graduate was flown by AirReach helicopter from the school to Grand Strand Regional Medical Center in Myrtle Beach, his mother by ambulance to McLeod Loris hospital, following the T-bone crash after 11:30 a.m. Saturday.

Neither the deputy, nor his young son who was in the Jeep Wrangler when it hit the driver’s side of the four-door Ford sedan were injured, refusing medical treatment.

Other deputies, already on campus for graduation, also aided with scene and traffic control. 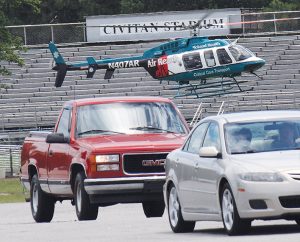 “Jaws of Life” extrication tools were used to cut the door and post away from the heavily damaged driver’s side of the car, where the new graduate was seated. His mother was in the front passenger seat.

The senior was conscious and talking as he was taken from the car to the ambulance before making the short ride to the football field as the medical helicopter landed.