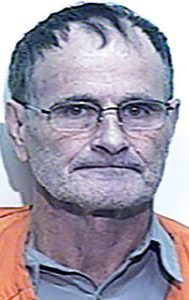 A previously convicted drug dealer stopped after leaving a known drug area had narcotics in his vehicle, but no pants on his body, Columbus County Sheriff Lewis Hatcher said in a news release.

James Eldred Buffkin, 67, of Pireway Road in Tabor City, was charged with possession with intent to manufacture, sell and deliver a schedule 2 controlled substance and maintaining a vehicle for the use, sale or storage of a controlled substance, both felonies.

Buffkin was held at the Columbus County Detention Center in Whiteville  under a $7,500 bond.

Sheriff’s Vice-Narcotics detectives were in a known drug area in Chadbourn when they noticed Buffkin’s vehile, “driving erratically,” and leaving the area, the news release said.

After Buffkin passed a detective’s unmarked vehicle in a curve, in a no passing zone, detectives conducted a traffic stop, as as they approached Buffkin “he was attempting to put on his clothing,” the news release said. “He was wearing no pants.”

A search of the vehicle uncoverd “approximately 30 dosage units of Oxycodone,” the news release said.