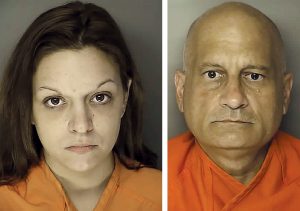 Panteleimon Nicolas Spirakis, 57, of Myrtle Beach and Lindsey Honeycutt, 31, who showed addresses in Myrtle Beach and Tabor  City when she was arrested in 2018, each entered guilty pleas before Circuit Court Judge Larry B. Hyman in Conway on Tuesday.

Spirakis was sentenced to serve 20 years in prison after entering guilty pleas to two counts of first-degree criminal sexual conduct with a minor; two counts of engaging a children for a sexual performance.

Spirakis entered the plea after a jury had been selected in his trial Tuesday morning, a day after Honeycutt told the court Spirakis had threatened to kill her because she was planning to testify for the state.

Trial dates have not been set for Ambrose Edward Heavener, 31, father of the victims with addresses in Tabor City and Conway; and Anthony L. Strickland, 46, of Myrtle Beach.

Police said Heavener was the father of the child victims, Honeycutt their mother.

“The crimes this defendant perpetrated on these children were some of the worst we have ever seen,” Andrew said. “He robbed them of an innocence that they will never get back.”

All of the crimes are alleged to have taken place in the Myrtle Beach area between December 2014 and April 2015, police said following the arrests.