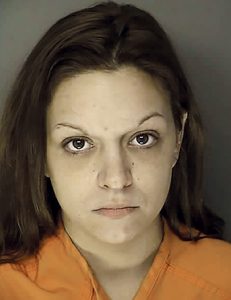 Lindsey Danielle Honeycutt was arrested Tuesday night after deputies found her passed out in a vehicle just off of NC 904 east of Tabor City, Det. Barrett Thompson of the Columbus County Sheriff’s Office said.

Deputies who searched the vehicle found other narcotics, and Thompson re-arrested Honeycutt Tuesday morning when she arrived at the Columbus County Courthouse for a first-appearance hearing.

Released on the marijuana possession charge Tuesday night under a $1,000 unsecured bond, Honeycutt was held Wednesday under secured bonds totaling $100,000.

“She told me she had had a bad day,” Thompson said Tuesday night. “At the time, I didn’t know what she meant.”

Honeycutt was free following her guilty plea because she is expected to testify against two other men in the child sex-crime case that involved her two children, how were 4- and 5-years-old when the crimes took place between December 2014 and April 2015, Horry County Police said following her arrest in spring 2016.

Her freedom came at a cost, Honeycutt out on a $150,000 surety bond, 15th Circuit Assistant Solicitor Leigh Andrew said Wednesday.

Andrew said she was not aware of Honeycutt’s Columbus County arrests until contacted by a report, but that she would be consulting with the North Carolina authorities and working to determine what impacts the new charges have on her in Horry County.

Honeycutt faces up to 60-years in prison when sentenced on her plea to two counts of assault and battery of a high and aggravated nature, which is a lesser included charge of criminal sexual conduct with a minor; and two counts of unlawful conduct toward a child, Andrew said.

Sentencing for Honeycutt is expected after the trials of Ambrose Edward Heavener, 33, father of the victims with addresses in Tabor City and Conway; and Anthony L. Strickland, 42, of Myrtle Beach. Those trials will be held separately, trial dates have not been set, Andrew said.

For more on Tuesday’s court proceedings, see this week’s Tabor-Loris Tribune in print and online. An update on this story, as events warrant, will be in the next edition.