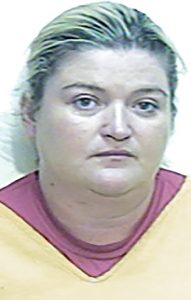 Felony charges of criminal use of counterfeit trademarks in an alleged on-line sales scheme have been leveled against a Tabor City woman, Columbus County Sheriff Lewis Hatcher said Tuesday.

Carroll Ann Barnes, 32, of Wright Road, Tabor City, was arrested Monday, a week after detectives seized goods worth an estimated $18,500 from her in the Whiteville Big Lots parking lot, the sheriff said in a news release.

Barnes was released from the Columbus County Detention Center under a $20,000 unsecured bond.

Hatcher described the case as ongoing, with additional charges possible.

An anonymous tip led detectives from the sheriff’s Criminal Investigation Unit to the parking lot at Big Lots in Whiteville on Aug. 20, where they watched as Barnes met with “numerous individuals to exchange items,” the news release said.

“Criminal investigators approached the defendant at her vehicle and observed several totes and boxes of items inside of the vehicle. The quantity of items in her possession exceeded what the average person would sell on a buy, sell, trade site.”

All of the items were seized as investigators determined that Barnes “had an online business where she received orders for items through a Facebook page,” the news release said. “The items on her page were represented as trademarked items such as Rainbow sandals, Beats headphones, Michael Kors purses, Oakley sunglasses, etc.”