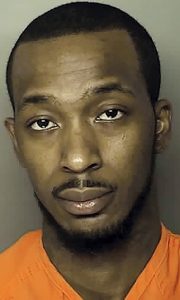 A guilty verdict in the first of three potential trials in a series of 2015 Horry County armed robberies that resulted in two murders will leave a Nichols man in prison for the rest of his life.

Circuit Court Judge Robert E. Hood sentenced Daniels to life in prison without the possibility of parole under South Carolina’s three strikes rule because the convictions were the fourth serious convictions for Daniels, who was convicted of kidnapping in 2005.

Those robberies took place within an hour of each other.

Evidence entered during the trial showed Daniels was also involved in the Jan. 2, 2015 armed robbery of a Sunhouse store on Red Bluff Road and SC 905 in Longs, and the murder of Bala Paruchuri there.

“Mr. Daniels played an important role in one of the most violent crime sprees in our recent history,” Richardson said. “I’m glad the Stull family, the Paruchuri family and the McDowell family can get justice.”

Charges in the Longs case remain pending. Two other men are awaiting trial in the robberies and murders,

Co-defendants McKinley Daniels, 37, and Jerome Jenkins, 24, both of Loris; are to be tried separately.