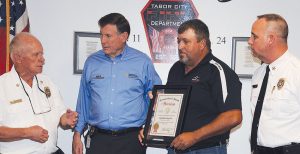 State honors were given to two Columbus County firefighters Thursday, one for heroism after pulling a neighbor from his fire-filled mobile home early this year, the other for a lifetime of service with multiple agencies.

Tony Miller was handed The Order of the Guardian from NC Insurance Commissioner Mike Causey inside the Cerro Gordo Fire Department, where his career began in 1964.

Capt. Greg Cox of the Tabor City Fire Department received The Commissioner’s Award for Heroism earlier in the day at his home fire station.

Commissioner Causey had a full day of activities in the county, speaking during a Seniors’ Health Insurance Information Program (SHIIP) Town Hall in Whiteville, stopping by several insurance agencies in Tabor City, visiting Chadbourn/Klondyke Fire/Rescue, and ending the tour in Fair Bluff on the site of the still-under-construction new Fair Bluff Fire/Rescue building.

Look for much more on the honors for Cox and Miller, and Commissioner Causey’s day in Columbus County, in the next Tabor-Loris Tribune in print and online.