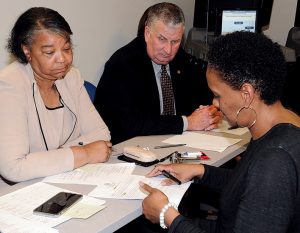 Another day, another total in the race for Columbus County Sheriff, though the Republican challenger Jody Greene remains the winner.

Observers left a marathon two days of county Board of Elections meetings Friday in the belief, stated by chairman Harold Fipps, that the election had been certified, Greene with a 43 vote lead.

Observers from both camps, Greene and Hatcher, were convinced the count was different, with Greene’s lead more narrow at 31 votes.

At issue was absentee ballots that had been counted, but did not appear to have been properly entered into the computer reporting results to the State Board of Elections.

State Board staff was at the county board Monday, making sure all of the data was correctly recorded, then entered to the state board by computer.

Local board members, never saying there was an error in the process Friday, voted formally to certify the election, with vote totals that differed from Friday. 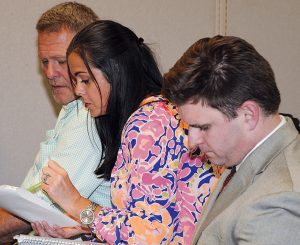 Hatcher said he was pleased with the process, Greene said he was not but would not say specifically why.

Hatcher, just before 5 p.m., filed a formal request for a recount, a request the law allows because the difference in the vote was within a one percent margin.

That recount date will be set by the state board, Bozeman said, but should be held by Wednesday because of the Thanksgiving holiday.

Look for a recap of the elections process to date in this week’s Tabor-Loris Tribune in print and online, to be published a day early, on Tuesday, due to the Thanksgiving holiday.