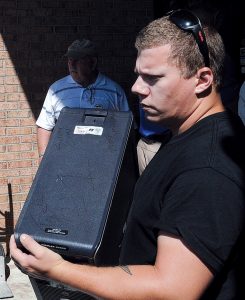 State recognition will be given to a Fair Bluff Police Department officer for his role in the capture of suspects in the slaying of a local North Carolina Highway Patrol Trooper.

Col. Glenn M. McNeill, Jr. is scheduled to make the presentation, recognizing Alsbrooks for his role in the capture of the first of two suspects in the Oct. 17 slaying of Master Trooper Kevin Conner during a traffic stop on U.S. 701 in the Sellerstown Community.

Conner was shot as he approached a vehicle he had stopped, and died later at New Hanover Regional Medical Center in Wilmington.

Investigators using video from the dash cam in the trooper’s car, and from a nearby store’s surveillance system, quickly identified a GMC truck as the suspect vehicle, and soon after that description was broadcast, Alsbrooks saw the truck as he was patrolling in Fair Bluff, said text from the recognition to be presented Tuesday and provided by patrol spokesman F/Sgt. Michael Baker said Wednesday

“Alsbrooks attempted to stop the vehicle which led to the one occupant fleeing on foot,” that text said. “Corporal Alsbrooks forced the suspect into laying down in a wooded area in close proximity of the vehicle stop until a perimeter could be established. He encircled the area for over 10 minutes until the first backup arrived on the scene.

“Corporal Alsbrooks actions that morning ultimately led to the capture and charging of two individuals for the murder of Trooper Kevin Conner.”

Chafin said he plans to join Alsbrooks and his family in Raleigh Tuesday for the awards presentation.

Look for more from the awards presentation in next week’s Tabor-Loris Tribune in print and online.