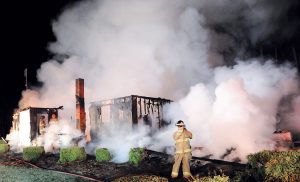 Fire that began under a carport claimed a home and three vehicles in the Clarendon area early Thanksgiving morning.

Mark Turbeville said his wife Dixie woke about 4 a.m. and discovered the fire before smoke alarms in the home sounded.

All three occupants of the home escaped safely, including the Turbeville’s adult son Ivan.

Though not conclusive, the fire appeared to have begun at a heat lamp in a dog house under the carport, Columbus County Fire Marshal Shannon Blackman said. The dog was not hurt.

Blackman said fire may have shorted out a doorbell switch at the carport door, with a constant ringing awakening Dixie Turbeville. Unaware of the fire, she opened the carport door, flames quickly pushing her back inside.

“She got everyone up, and they got out the back door,” Blackman said. “Her car was already pretty much burned up.”

Mark and Ivan Turbeville’s pick-up trucks were also lost to the fire.

Despite the holiday loss, Ivan said the family has much to be thankful for on Thanksgiving.

“We all got out, nobody got hurt,” Ivan said. “That’s something to be thankful for.”