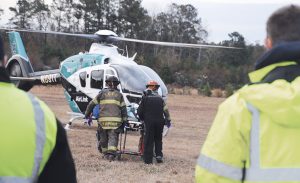 Man hit by a car in Tabor City Friday afternoon is taken to a waiting AirLink helicopter. (Deuce Niven, TLT)

A man struck by a car near Tabor City’s busiest intersection was airlifted to a regional medical center Friday afternoon.

It was not clear just how serious the man’s injuries were, Officer Christopher Cotton of the Tabor City Police Department said. It appeared that the man’s head impacted the windshield of the car before he rolled off, Cotton said. The man was able to talk to EMS workers, the officer said. 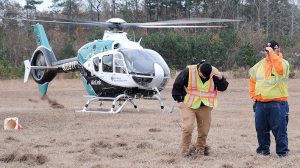 An AirLink helicopter based at Columbus Regional Healthcare in Whiteville responded, and apparently took the man to Grand Strand Regional Medical Center in Myrtle Beach.