A man and woman in custody following a law enforcement that began and ended in Columbus County Thursday, winding into Loris and through a portion of northern Horry County, have been identified.

Quentin Montray Vereen, 20, of Ten Mile Road, Tabor City and Marquita Donta Vereen, 31, of Ridgeland Acres Road, Tabor City, were taken into custody after the car they were in overturned on McCrimmon Extension east of Tabor City before noon Thursday, a news release from Sheriff Jody Greene said. 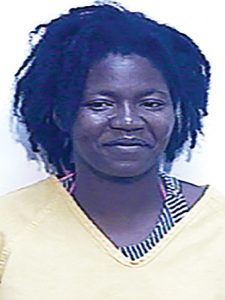 Quentin Vereen was found in a wooded area to the east of the overturned car as search teams combed the area with support from a South Carolina State Law Enforcement Division (SLED) helicopter overhead.

During the search it appeared that three men had fled from the car, including Quentin Vereen. It was later determined that there were two men, one who has not been apprehended, sheriff’s spokeswoman Michelle Tatum said.

Marquita Vereen was charged with felony possession of a schedule 1 controlled substance, misdemeanor marijuana possession, and possession of marijuana paraphernalia. She was jailed at the Columbus County Detention Center under a $3,500 secured bond.

Quentin Vereen was charged with resisting law enforcement, his unsecured bond set at $1,000.

Deputies encountered the burgundy Ford Focus in the parking lot behind Fowler’s Grill just before 11 a.m. Thursday, and as a man got out deputies noticed an odor of marijuana, the news release said. 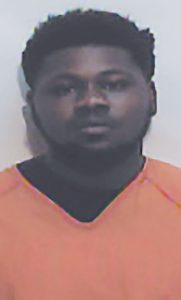 As deputies approached, the car left “at a high rate of speed on Live Oak Street and Pireway Road,” the news release said.

Deputies activated their blue lights and sirens as the car sped on, into South Carolina, and eventually back into Columbus County and McCrimmon Extension, a dirt road where the car overturned coming out of a curve.

Look for developments here as events warrant, and the full story in the next Tabor-Loris Tribune in print and online.

A law enforcement pursuit that began in Columbus County and wound through parts of northern Horry County ended with an overturned car and three men on the run just north of the state line Thursday.

Four people were in the burgundy car when the driver lost control on a curve on McCrimmon Extension east of Tabor City before noon Thursday, Chief Deputy Aaron Herring of the Columbus County Sheriff’s Office said.

A woman was unable to get out of the car, which came to rest on the passenger side at the edge of a ditch, Herring said. Three men were able to get out and escaped into a nearby wooded area.

A heavy law enforcement presence quickly descended on the area, which is just east of the Green Acres community, Herring said. It appeared that the search area was focused on a wooded area to the east of McCrimmon Extension. 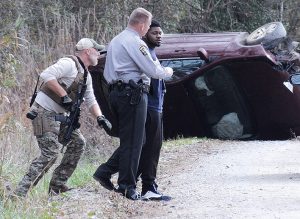 Caught in a wooded area, a suspect in custody on McCrimmon Extension. (Deuce Niven, TLT)

Officers from the Horry County Police Department, South Carolina’s State Law Enforcement Division (SLED), the U.S. Marshal’s Service, and the U.S. Drug Enforcement Administration were involved in the search. Some may have been nearby looking for suspects in a large federal drug investigation that resulted in the arrests of 24 people Wednesday in Horry County, with three still at large.

As a SLED helicopter circled overhead, heavily armed officers entered the woods off of McCrimmon Extension, and had one man in custody about 1 p.m.

Officers had not located the other two men by 3:30 p.m., Herring said.

A deputy who thought one of the men in the car looked like Mhalik Jhamal Graham, 21, who is wanted by police in Tabor City for a series of early morning break-ins Monday, Herring said.

After that deputy pulled the car over and walked towards it, he thought he smelled marijuana as the car sped away, leading to the pursuit, Herring said.

It is not clear that Graham was in the car, Herring said.

Look for updates here as warranted, and the full story in the next Tabor-Loris Tribune in print and online.