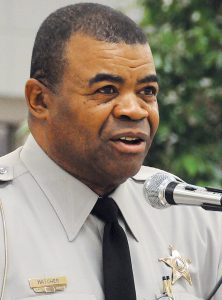 Jody Greene “is a Usurper of authority and is unlawfully holding the Office of Sheriff of Columbus County,” a complaint filed by former Sheriff Lewis Hatcher on Friday says.

Blanks said he is asking for a hearing before a Superior Court judge “as soon as possible,” that that Hatcher should be returned to office until a certificate of election is issued for the office.

Defendants named in the complaint include Greene, “Individually and in his disputed official capacity as sheriff,” all seven Columbus County Commissioners, and County Manager Mike Stephens, his name misspelled Stevens on the complaint.

In the complaint Hatcher maintains that:

Hatcher also maintains that Greene “has not shown he is even qualified to vote in the election for the Sheriff of Columbus County for failing to establish residency and therefore should be disqualified for office.”

Hatcher asks the court for “a temporary restraining order, a preliminary injunction and a permanent injunction” that would require Greene, commissioners and the county manager to recognize Hatcher “as the true and indeed Constitutional and Statutory Sheriff of Columbus County.”

Hatcher also seeks monetary damages, attorney fees, legal costs, and “such other and further relief as the court deems proper.”

Look for updates to this developing story here as events warrant, and the full story in the next Tabor-Loris Tribune in print and online.