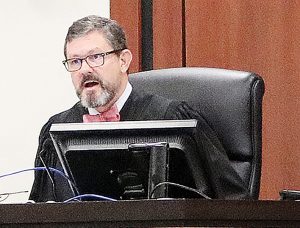 With a 30-day clock ticking on a lawsuit brought by former Columbus County Sheriff Lewis Hatcher against currently installed Sheriff Jody Greene, and others, a jury trial date has been set for Feb. 11, most likely in Burgaw. 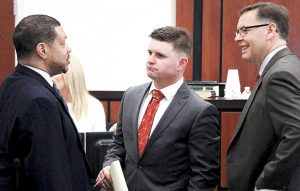 Wake County Superior Court Judge A. Graham Shirley made clear that the law, not politics would guide him as he went through procedural matters with attorneys representing Hatcher, Greene, and Columbus County Commissioners in a Superior Courtroom in Whiteville Friday morning.

With sides clearly drawn for many across Columbus County, and with court bailiffs former or current employees of both 2018 sheriff’s candidates, Judge Shirley said there was no way the trial would be decided by a Columbus County jury.

State law requires that trial be set in a county that borders Columbus, Judge Shirley said, and that would include Pender County, straight down I-40 from Wake County.

Judge Shirley set deadlines for attorney’s for Hatcher and Greene to complete discovery and file depositions in preparation for trial, and warned both sides to be careful not to file frivolous motions with the court that could result in sanctions.

Judge Shirley also set a surety bond required for Greene at $25,000, roughly the amount he could be required to pay Hatcher if the jury finds that Greene has not been the rightful holder of the sheriff’s office since he was sworn on Dec. 3, 2018.

County commissioners and County Attorney Mike Stephens, also named in the lawsuit by Hatcher, have not direct stake in the outcome, and Judge Shirley ordered the case against them severed, the jury on Feb. 11 to focus solely on the question of if Greene should have been sworn into office in December, or if Hatcher should have remained in office until elections protests and appeals were finalized.

Law will decide the case, not politics, Judge Shirley said.

“I will let the chips fall where they may,” he said.