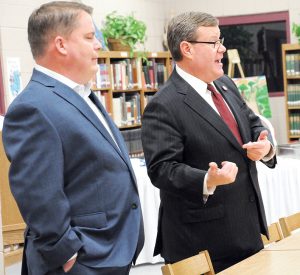 School building needs in Columbus County would get from $9 million to $12 million if a proposed $1.9 billion school construction bond issue is approved by voters state wide, Speaker of the NC House of Representatives Rep. Tim Moore (R-Cleveland) said during a stop at South Columbus High School Friday.

Moore was joined by Deputy House Majority Leader Brenden Jones (R-Columbus) of Tabor City, school leaders from the Columbus and Whiteville city schools, a county commissioner and Sheriff Jody Greene as he offered a broad outline of the bill state lawmakers will consider later this  year.

From Moore’s proposal to dollars for schools will take two years, and require approval from both houses of the legislature, most likely the governor’s signature, and ultimately the majority of voters across North Carolina.

Moore said he hoped to see the bond issue before voters during the 2020 primary elections. Approval then would mean money would start flowing to the counties in 2021.

Moore said he was optimistic that his bill will become law, and that voters will ultimately approve the bonds, which will not require a tax increase.