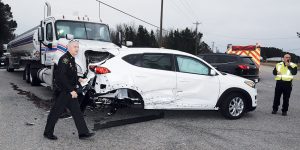 Injuries to one woman did not appear life threatening following a three-vehicle crash on US 701 at NC 410 at East Tabor at 9 a.m. Monday.

Video of the crash from a surveillance system at Long’s Outdoor Equipment enhances the argument, business owner Joe Long said, that a signal light is needed at the intersection that has seen numerous wrecks during the 17 years the business has been there.

See the video here, and much  more of this story in Wednesday’s Tabor-Loris Tribune in print and online.