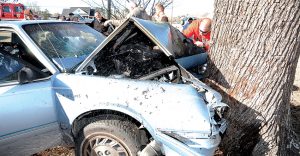 A firefighter sprays water under the hood of an Oldsmobile that struck a tree in Vinegar Hill Monday afternoon. (Deuce Niven, TLT)

There were numerous things the older Oldsmobile could have hit after leaving U.S. 701 at Minos Meares Road Monday afternoon, but the sturdy tree that crumpled the Cutlass Ciera stood in the way of a small wooden house.

Occupants of the home and passing motorists helped improve the outcome for the older woman behind the wheel, pulling her from the car as fire erupted under the hood, using a garden hose to extinguish the flames before fire department and other emergency personnel could arrive.

Firefighters from Tabor City and Williams Township made sure the fire was out, and established a landing zone nearby on the football field at South Columbus High School. 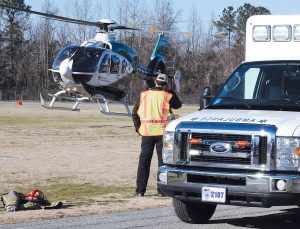 Tabor City Emergency Services personnel took the woman, who was talking to them, to meet an AirLink helicopter. Damage to the car was extensive, air bags deployed, but fire never got to the woman.