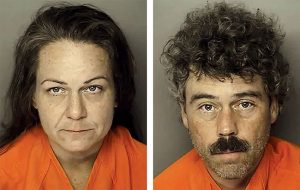 A couple from Whiteville accused in warrants obtained through DNA evidence in a series of vending machine break-ins beginning last June may be in Horry County, Maj. Allen May of the Whiteville Police Department said Wednesday.

Vending machines at five Whiteville businesses were entered and damaged between last June and January of this year, May said, “causing several thousand dollar’s worth of damage to numerous vending machines” in addition to the theft of money.

“The path of theft and destruction came to an end through the determined and persistent work of Detective Ron Guyton, who was able to obtain a DNA sample from a machine vandalized by the Ling’s,” May said.

Combined with video surveillance images, the DNA sample provided the probable cause needed to obtain the warrants against the Lings.

Neither is in custody, May said, and both are facing similar charges in Brunswick County and are believed to be in South Carolina, possibly in Horry County.

Both were arrested last July by the Conway Police Department on cocaine, marijuana and drug paraphernalia charges, William Ling also charged with shoplifting and having an open container of alcohol in a vehicle, records at the J. Reuben Long Detention Center near Conway show.

Both served nearly a month in the jail before being released on last Aug. 24.

Anyone with information on the Ling’s location is asked to contact the Whiteville Police Department at 910-642-5111 or their local law enforcement agency.

Updates on this story will be posted as events warrant. Look for the full story in the next Tabor-Loris Tribune in print and online.