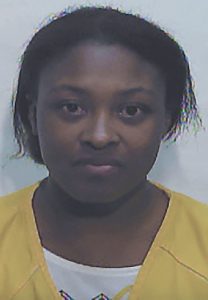 Victoria Neal will face charges related to the Feb. 14 robbery of the BB&T branch in Loris, Chief Gary Buley of the Loris Police department said Saturday.

Det. Eric Stevens “got a full confession from the girl,” Buley said Saturday. “It was a team effort between Whiteville PD and Loris.”

Neal was arrested by Whiteville police Thursday afternoon outside a First Bank branch there, taken into custody as she approached her car with money just taken from the bank, WPD Maj. Alan May said.

Neal remained at the Columbus County Detention Center on Saturday, charged with robbery with a dangerous weapon, her bond set at $250,000.

For more on this story see the next Tabor-Loris Tribune, in print and online.

A quick arrest in a Friday afternoon bank robbery in Whiteville may to resolve a very similar hold-up in Loris last week.

Victoria Neal, 28, of Columbia, South Carolina, was in the process of leaving a First Bank branch in Whiteville when Whiteville Police Department officers arrived and quickly took her into custody Friday afternoon, WPD spokesman Maj. Alan May said.

Officers responded to the call on J.K. Powell Blvd about 3:15 p.m. Friday, and were given a description of a woman as they approached, May said in a news release.

Sgt. Jose Garcia and Officer Vann Brock saw Neal in the parking lot as they arrived, and recovered cash taken in the robbery.

Bank staff and customers in the branch were not injured.

Neal was charged with robbery with a dangerous weapon and booked into the Columbus County Detention Center in Whiteville, her bond set at $250,000, May said. Records there show that Neal is homeless.

“Charges are also pending for similar style robbery in Loris,” May said.

Investigators in Loris are investigating Neal as a possible suspect, May said.

A BB&T branch in Loris was robbed at about the same time of day on Feb. 14, when a woman entered the bank on Broad Street, said she had a gun, and demanded money.