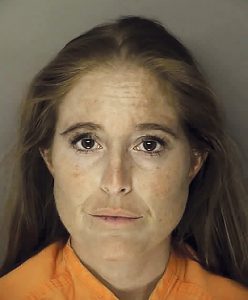 A teacher at Loris High School was arrested for possession of an open container of alcohol on campus Thursday, Loris Police Chief Gary Buley said.

Charged with public possession of a city ordinance violation of having open container of alcohol in a public place, McCoy was booked at the J. Reuben Long Detention Center near Conway, her bond set at $100, jail records said.McCoy has been placed on administrative leave with pay, Horry County Schools spokeswoman Lisa Bourcier said.

A “very minor motor vehicle accident” in the school parking lot before noon Thursday led to the discovery of beer in McCoy’s desk, the report by Williams, LPD’s detective, said.

A student who looked into McCoy’s vehicle noticed “what appeared to be unopened beer cans” in it, and notified school staff, the report said.

School administration notified Officer Jimmy Jackson, the School Resource Officer assigned to LHS. School administration members located McCoy, brought her to the office to discuss possible violations of school rules or policies. Jackson and a member of the school staff went to McCoy’s room to gather her keys and personal belongings. Both McCoy and school leaders asked that her belongings be retrieved, the report said.

Jackson “opened a desk drawer to retrieve the items and observed an open can of Ice House beer in the desk,” the report said.

Told that police were not conducting a criminal investigation, McCoy said “she was not willing to speak with officers without an attorney present,” and police “terminated” the interview and arrested her, the report said.