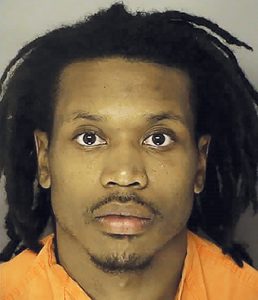 A third Tabor City man is in custody accused of murder in a parking lot slaying at a Food Lion in Longs last August.

Rodney Crayshawn Gore, 24, of Ridgeland Acres, Tabor City, has been charged with accessory before the fact of a felony in the Aug. 15, 2018 robbery attempt and murder of Gerard Celentano, 57, in the Food Lion parking lot on SC 9, an Horry County Police Department news release said.

Gore’s arrest comes less than a month after that of Stephon Lee Miller, 21, who was arrested by U.S. Marhsals in Tabor City on Lewis Street in Tabor City on March 25. He was charged with murder in the case, and transferred to the J. Reuben Long Detention Center near Conway on March 29, jail records show.

James Laverne Bellamy, 47, also of Tabor City, was arrested by U.S. Marshals near Fair Bluff on Aug. 29, 2018, and has also been charged with murder.

A fourth suspect, who has not been publically named, apparently remains at large.

Gore “is believed to have driven three individuals armed with guns” to the Longs Food Lion, dropping the others off who “then proceeded to rob and murder Gerard Celentano,” the news release said.

“HCPD is grateful for all of the community tips and witness statements that have aided in investigating the case,” the news release said. “Anyone with rurther information related to the incident is asked to call HCPD at 843-915-TIPS (8477).