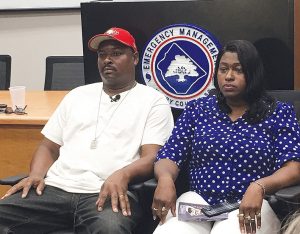 Their son’s accused killer still on the run a year after Charles Edward Durant II was shot dead on a Loris street, Charles and Wiletria Durant on Friday issued a plea to surrender.

Their plea came during a press availability held in Conway, the Durants asking that the presumed shooter, Tyshawn “Smoke” Brown, surrender to police.

“It’s been rough,’ Charles Durant said. “Hard to explain losing a life over something stupid. When you pull a trigger, you can’t take that bullet back.

“I want justice served. I believe in an eye-for-an-eye and a tooth-for-a-tooth. Be a man and turn yourself in.”

Two people were shot during the April 24, 2018 confrontation on Spring Street, the junior Durant and his girlfriend, Winter Parker, police said.

When police responded after the 9:41 p.m. shooting, Durant was already dead. Parker survived after many surgeries.

Heath Cherife Reaves Jr., 21, of Loris was arrested by US Marshals in Philadelphia about a month after the shooting. He was later returned to Horry County and was charged with murder and attempted murder.

Reaves remains in custody at the J. Reuben Long Detention Center near Conway.

Warrants charging Brown with murder remain in the hands of detectives, including Amy Hardwick who has been close contact with the Durants during the past year.

“We have sleepless nights,” Wiletria Durant said. “It’s hard for a mom who doesn’t expect a child to go before you. He was the life of the party and had a great smile. He had goals and dreams, like getting married.”

A $7,000 reward has been offered for information leading to the arrest of Brown. Anyone with information on his location, or anything else in the case, is asked to contact the Horry County Police Department at 843-915-5350.

Rewards have been offered by Crimestoppers and the Federal Bureau of Alcohol, Tobacco & Firearms (ATF).

Brown is considered armed and dangerous, and he is being actively investigated by both the ATF and HCPD