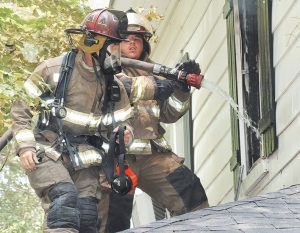 Hose at the ready, a firefighter prepares to make entry on the second floor of a Pireway Road home Monday. (Deuce Niven, TLT photos)

“It was an intentional fire,” Blackman said.

Neighbors spotted smoke coming from a front corner window on the second floor of the home on Pireway Road at Live Oak Street and called 911 just before 1 p.m. Flames had erupted from a window by the time the first fire trucks arrived.

Firefighters contained the blaze to that room, Blackman said. 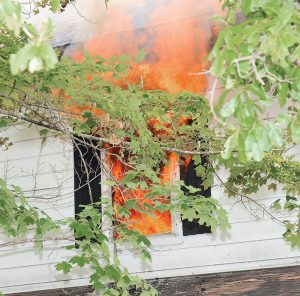 Flames leap from a second floor room on Pireway Road.

There was smoke and heat damage to some adjacent rooms, but the old home was in poor condition before the fire and is likely a total loss, Blackman said.