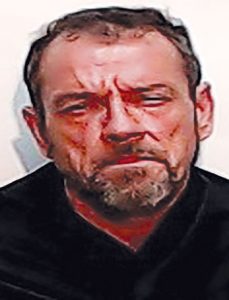 Fleeing from a traffic checkpoint set up by the Columbus County Sheriff’s Office HEAT Team, a Conway man led deputies on a high speed chase that ended after he rammed a patrol car, careened into a yard, slamming into the back of a truck parked there.

Donald Allen Bonini, 50, of Snow Hill Drive in Conway, was charged with assault with a deadly weapon on a government official, driving while impaired, fleeing to elude arrest, and reckless driving, Columbus County Detention Center records show. He was jailed under bonds totaling $32,500.

HEAT Team deputies has set up a checkpoint in the early morning Thursday on US 701 about a half mile south of Sellerstown Road when the vehicle Bonini was driving approached, initial slowing, then speeding up as it neared a deputy in the road with a flashlight “almost hitting the deputy,” sheriff’s spokeswoman Michelle Tatum said.

“The deputy got into his vehicle and pursued the vehicle, traveling at a high rate of speed,” Tatum said, “over 90 mph.”

During the pursuit Bonini “attempted to run the deputy off the road, hitting the deputy’s vehicle,” Tatum said.

Bonini lost control of his Mitsubishis SUV, into a yard, and stopping as Bonini jumped and fled on foot before he was “caught and apprehended,” Tatum said.

Bonini’s SUV struck the rear of a parked pick-up truck owned by Jonathan Smith, which rolled through a support beam on the corner of Smith’s carport, Smith said.

Smith, in a Facebook post, said he “Woke to sirens and a strange vehicle in my yard… A bit  ‘Thank You’ to Tabor City PD, Columbus County Sheriff Dept, and NCHP for catching the suspects that drove through my yard, hit my truck (which is probably totaled now), pushed the truck into the support beam for the carport/roof breaking it, and then tried to run. I BACK THE BLUE!”

Bonini’s Mitsubishis “was seized under the one and done law,” Tatum said.

Deputy Patrick Herring was driving the patrol car that was hit, Chief Deputy Aaron Herring said. Herring was not injured.

An investigation by the NC Highway Patrol is also underway related to the collision during the pursuit, and in at the Smith home.

Look for more of this story in the next Tabor-Loris Tribune in print and online.