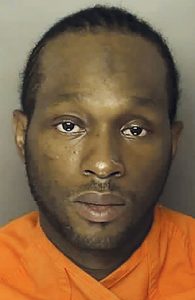 Malcolm Kashif Bellamy, 33, of Jackson Street, Chadbourn, was charged with possession of the stolen Glock handgun, unlawful carrying of a pistol, possession of firearms and ammunition, possession of a controlled substance, possession of marijuana, having an open alcoholic beverage in his vehicle, and driving without a license, the Aug. 6 report by Officer Houston Sauer said.

Bellamy, who is shown with a Jacksonville address on J. Reuben Long Detention Center records, was released from the jail a day after his arrest after posting bonds that totaled $5,000.

Sauer stopped the blue Honda car after it made a right turn from Railroad Avenue on to Maple Street with no turn signal, the report said, catching up to the vehicle on Casey Street, where is stopped in a McLeod Loris hospital parking lot.

An odor of marijuana was coming from the car, and Bellamy admitted to police that he did not have a driver’s license, and never had.

Bellamy also admitted to having marijuana in his pocket, which was retrieved after he was placed in handcuffs, the report said.

When a back-up officer arrived and Bellamy was secure, Sauer said he searched the Honda, finding a Glock 23 .40 caliber handgun under the driver’s seat. Elsewhere in the car he found ammunition for the Glock, assault rifle ammunition, a single off-white round pill later identified as Oxycodone in an orange pill bottle, and four cell phones.

When Hurricane Matthew roared through the region in October 2016 it left thousands without power for extended periods, including Five Star Gun on Hwy 9 in Longs.

Battery back-ups eventually ran out, leaving the store’s alarm system useless when thieves forced their way in on Oct. 9, “during the height” of the storm, the federal Bureau of Alcohol, Tobacco, Firearms and Explosives reported at the time.

More than 200 guns were stolen. Loris Police Chief Gary Buley said Tuesday that many have been recovered, but not all.

At least one man, Norad Arcane McCullough of Loris, was charged with possession of one of those stolen guns in late November, 2016.

Bellamy is at least the latest to be found with one of the guns stolen from Five Star.

For much more Tabor-Loris Community news and information see today’s Tabor-Loris Tribune in print and online.