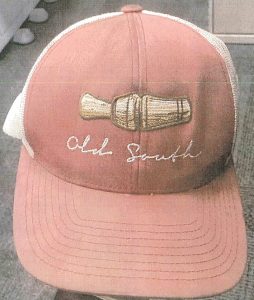 This hat was found following a state-line home invasion burglary in the pre-dawn Friday.

A hat apparently left behind during a home invasion burglary in the edge of Horry County may be a key in identifying those responsible, Chief Donald Dowless of the Tabor City Police Department said Monday.

An elderly woman, 93, was home alone about 4:30 a.m. Friday when her carport door was kicked in, two people entering and restraining the victim “by holding her down on the couch” where she had been sleeping, Horry County Police Department Officer Terry Elliott said in an incident report.

The woman told police she could not see the burglars because the lights were off, but that she believed one was a man, the other a woman.

A flat screen TV worth about $200 was taken by the thieves, the report said.

Once the burglars were gone, the woman walked from her home off of Little Bethel Church Road just south of Tabor City, to the residence of a neighbor, and called 9-1-1. The woman was shaken, but not injured.

A family member discovered the hat under a living room table later Friday morning. That hat, Chief Dowless said, may not be unique but is distinctive enough that it could provide a break in the case.

With a duck call in the center of the red front, the hat also has a red bill and white back, the brand name “Old South” emblazoned below the duck call.

Anyone who believes the recognize the hat, and who might have worn it, is asked to contact the Tabor City Police Department, or Chief Dowless, at 910-234-0949.

Look for updates on this story as events warrant here, and in the next Tabor-Loris Tribune in print and online.